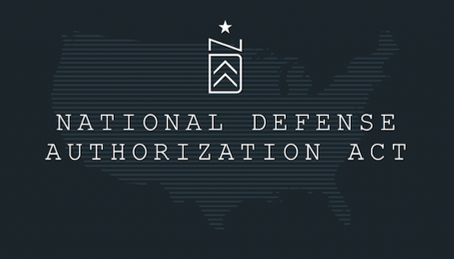 This bill was enacted after being signed by the President on August 13, 2018.

The following three areas of focus within the National Defense Authorization Act (NDAA) present opportunities for energy-saving Buy American Act (BAA) Compliant LED lighting, given that lights are used for combat range and test facilities and lights are “equipment” that needs to be maintained. The largest opportunity for BAA Compliant LED lighting is in the “Rebuilding Infrastructure” section that authorizes over $11 billion for construction that includes family housing and over $340 million specifically for depot maintenance. This American made lighting opportunity is an area of focus for the America LED Alliance.

#2: National Defense Authorization Act Repairing Equipment – The legislation authorizes $21.8 billion for equipment maintenance and $3.7 billion for spare parts, which is an increase of $927.9 million over the FY18 Omnibus.

#3: National Defense Authorization Act Rebuilding Infrastructure – There is an increase in funding for facilities sustainment by $470.9 million and authorizes $11.3 billion for military construction, including family housing. An additional $340.5 million is authorized for depot maintenance.

H.R. 5515 authorizes and prioritizes funding for the Department of Defense (DoD) and military activities and construction, and prescribes military personnel strengths for Fiscal Year 2019. The bill complies with the bipartisan budget agreement and authorizes $639.1 billion in base funding. Further, the bill authorizes an additional $69 billion in the Overseas Contingency Operations (OCO) fund to cover contingency operations. When factoring in $8.9 billion for mandatory defense spending, a total of $717 billion is authorized to be appropriated. Significant provisions of the legislation include:

Caring for Troops and Their Families – The NDAA increases the size of the Army, Navy, Air Force, Naval and Air Reserve, and Air Guard, fully funds a 2.6% pay raise for our troops, and extends a special pay and bonuses for servicemembers in high-demand fields.

The proposal ensures no military medical treatment facility will be closed or downgraded until all facilities are transitioned to the Defense Health Agency, and directs the Department of Defense to improve the process for reporting crimes to the FBI database, require DoD schools to improve tracking of juvenile misconduct, and refine sexual assault prevention and response to better assist victims.

To honor and celebrate 100 years of patriotic sacrifice for our men and women in uniform, the legislation authorizes a parade in the nation’s capital and a national celebration.  The legislation prohibits the use of operational units or equipment in the Secretary of Defense believes such use will hamper readiness.

National Defense Authorization Act Increased Training – The legislation increases funding for training for each Service.  This will allow the Army to conduct 20 Combat Training Center rotations, including four rotations for the Army National Guard.  The Army can also hold two Security Force Assistance Brigade culminating training events a year, and the Marine Corps is enabled to maximize the capacity of their full-spectrum collective training exercises.

Funding for flying hours has been increased by $24.2 million and funding for other training operations totals nearly $83 million above the increase already included in the President’s Budget Proposal.

The bill authorizes an additional $58.9 million to improve and modernize major combat range and test facility bases to include procurement of advanced threat radar systems.

National Defense Authorization Act Aviation Readiness – The legislation fully supports the President’s budget request of $2.8 billion for the procurement of spare airplane parts and authorizes an additional $100 million for spare parts for the F-35 Joint Strike Fighter. The bill includes an increase of $65 million for the A-10 wing replacement program and directs the Air Force to consider using multi-year procurement contracts to generate better cost-savings.

National Defense Authorization Act Repairing Equipment – The legislation authorizes $21.8 billion for equipment maintenance and $3.7 billion for spare parts, which is an increase of $927.9 million over the FY18 Omnibus.

National Defense Authorization Act Readiness at Sea – To address recent fatal accidents at sea, the bill directs the Navy to provide clear chains of command for operations, for building readiness, and for shipyard maintenance. The Navy is required to establish separate career paths for Surface Warfare Officers to help produce crews that are properly trained and skilled.  The time a Navy vessel is forward deployed overseas is limited to no more than 10 years, and the redevelopment of the Former Ship Repair Facility on Guam is prohibiting to ensure the Navy retains sufficient ship repair capability in the Western Pacific.

National Defense Authorization Act Building a Modern Force – The legislation supports the President’s request to buy new equipment to replace that which is too broken or too expensive to repair, or lack modern capabilities useful against current and emerging threats. These include:

National Defense Authorization Act Rebuilding Infrastructure – There is an increase in funding for facilities sustainment by $470.9 million and authorizes $11.3 billionfor military construction, including family housing. An additional $340.5 million is authorized for depot maintenance.

The Department of Defense did not request a Base Realignment and Closure effort this year and the legislation does not authorize one.

National Defense Authorization Act Expanding Agility – The bill calls for a historic clarification of the acquisition process by restructuring the United States Code to logically assemble all acquisition-related statutes in one place for the first time since 1947.  The bill repeals dozens of obsolete provisions or law, prescriptive statutory requirements for positions and officers, and outdated reporting requirements.

National Defense Authorization Act Space Warfighting – The legislation directs the Department of Defense to develop a plan to establish a separate alternative acquisition process for space acquisitions and directs the Secretary of the Air Force to develop and implement a plan to increase the size and quality of the space cadre within the Air Force. The bill establishes a sub-unified command for space under the Strategic Command for carrying out joint space warfighting and directs the Secretary to develop a plan that identifies joint mission-essential tasks for space as a warfighting domain.

National Defense Authorization Act Russia – The legislation takes the following steps to combat Russian aggression towards the United States and its allies:

National Defense Authorization Act China – As China makes investments and advances in its military capabilities, this legislation directs a whole-of-government strategy to confront the People’s Republic of China and bolsters DOD’s efforts to plan for and provide the necessary forces and military infrastructure and logistics capabilities in the region. The bill supports military exercises with Japan, Australia, and India and improves security cooperation to counter China’s rising influence in Asia, Southeast Asia, and other regions.

Support for improving Taiwan’s defense capabilities are included in the bill, including joint training, military sales, and the use of security cooperation authorities, and the legislation prohibits any U.S. government agency from using risky technology.

National Defense Authorization Act Counterterrorism – The bill authorizes the Counter ISIS Train and Equip Fund to aid partners and allies fighting ISIS and extends the Syria Train and Equip Authority through 2019.  The bill authorizes continued security cooperation with the Government of Iraq and supports the Afghan military in its fight against the Taliban. U.S. Special Operations Command programs and activities are authorized including ongoing efforts in Iraq, Syria, Afghanistan, Yemen, Somalia, and Eastern Europe.